Linear models are a very simple statistical techniques and is often (if not always) a useful start for more complex analysis. It is however not so straightforward to understand what the regression coefficient means even in the most simple case when there are no interactions in the model. If we are not only fishing for stars (ie only interested if a coefficient is different for 0 or not) we can get much more information (to my mind) from these regression coefficient than from another widely used technique which is ANOVA. Comparing the respective benefit and drawbacks of both approaches is beyond the scope of this post. Here I would like to explain what each regression coefficient means in a linear model and how we can improve their interpretability following part of the discussion in Schielzeth (2010) Methods in Ecology and Evolution paper.

Let’s make an hypothetical example that will follow us through the post, say that we collected 10 grams of soils at 100 sampling sites, where half of the site were fertilized with Nitrogen and the other half was kept as control. We also used recorded measure of mean spring temperature and annual precipitation from neighboring meteorological stations. We are interested to know how temperature and precipitation affect the biomass of soil micro-organisms, and to look at the effect of nitrogen addition. To keep things simple we do not expect any interaction here. 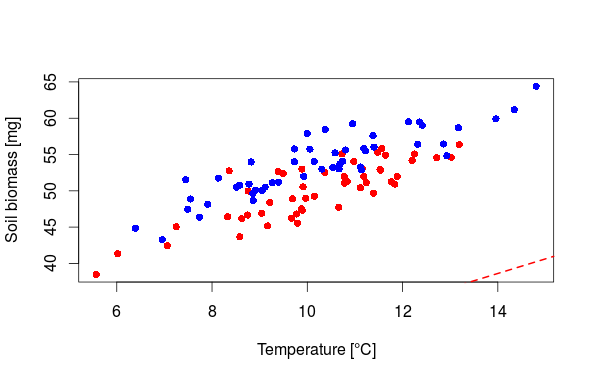 What happened there? It seems as if our model is completely underestimating the y values … Well what we have been drawing is the estimated effect of temperature on soil biomass for the control group and for a precipitation of 0mm, this is not so interesting, instead we might be more interested to look at the effect for average precipitation values: 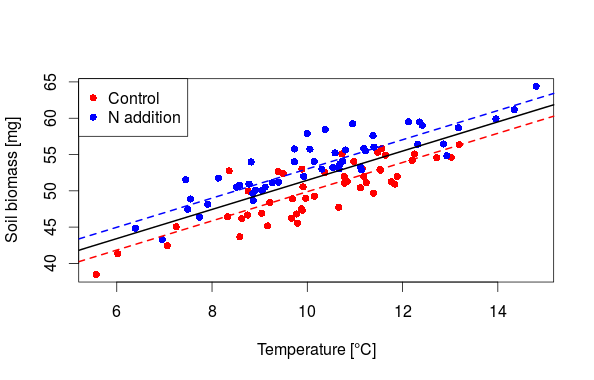 In this model the intercept did not make much sense, a way to remedy this is to center the explanatory variables, ie removing the mean value from the variables.

Now through this centering we know that under average temperature and precipitation conditions the soil biomass in the control plot is equal to 50.46mg, in the nitrogen enriched plot we have 53mg of soil biomass. The slopes are not changing we are just shifting where the intercept lie making it directly interpretable. Let’s do a plot 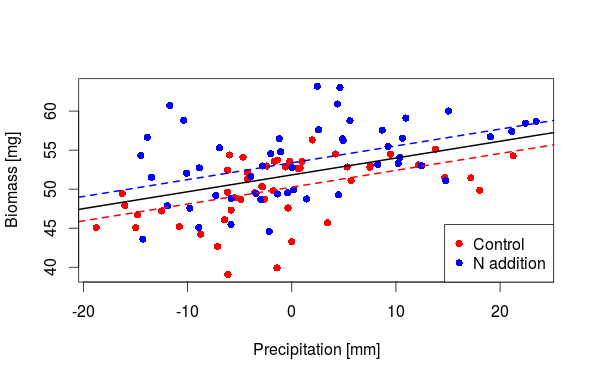 From this we can conclude that temperature as a bigger impact on soil biomass than precipitation. If we wanted to compare the continuous variables with the binary variable we could standardize our variables by dividing by two times their standard deviation following Gelman (2008) Statistics in medecine.

Here we saw in a simple linear context how to derive quite a lot of information from our estimated regression coefficient, this understanding can then be apply to more complex models like GLM or GLMM. These models are offering us much more information than just the binary significant/non-significant categorization. Happy coding.

View all posts by grumble10